Google is walking back plans to replace third-party cookies with FLoC by instead proposing the Topics API, a new system for interest-based advertising. Topics works by pinpointing five of your interests, such as “Fitness” or “Travel Transportation,” based on your web activity, as measured by participating sites, for one week.

Your browser will store these topics for three weeks before deleting them. Google says that these categories “are selected entirely on your device” and don’t involve “any external servers, including Google servers.” When you visit a website, Topics will show the site and its advertising partners just three of your interests, consisting of “one topic from each of the past three weeks.”

As noted on the Topics API GitHub page, there are currently about 350 available topics in its advertising taxonomy (although Google plans on adding anywhere from “a few hundred” to “a few thousand” eventually). Google says Topics won’t include any “sensitive categories” like race or gender. And if you’re using Chrome, the company is building tools to let you view and delete topics, as well as turn off the feature. 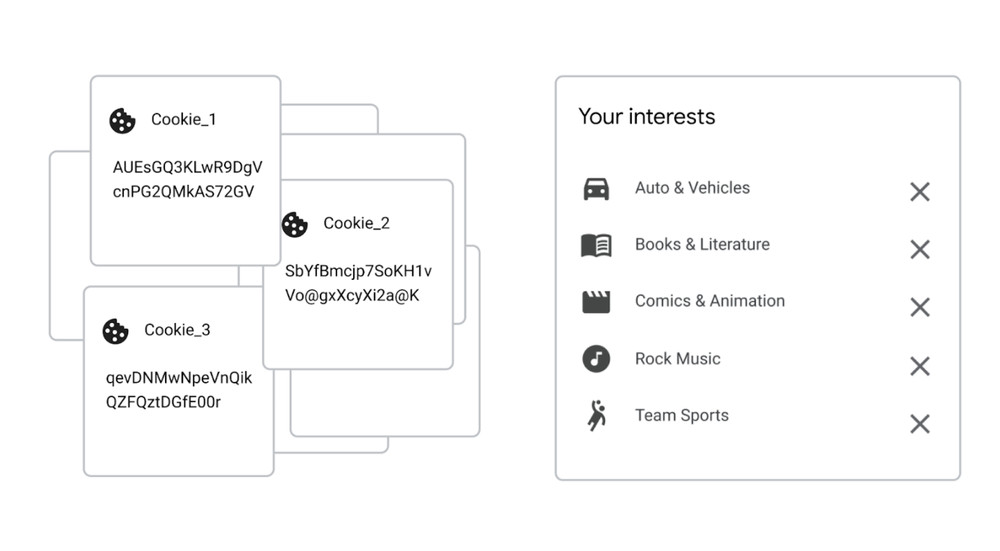 Cookies (left) compared to Topics (right), which Google says will be easier to manage and understand. Image by Google

Google’s running out of time to replace third-party cookies in Chrome by 2023, as promised. The company plans on launching a developer trial for Topics in Chrome, but there’s no information on when exactly that will begin.

“Browsers have traditionally worked only for the users — remember how great it was when they all started blocking pop-up ads?” John Bergmayer, the legal director at Public Knowledge, a nonprofit that promotes an open internet, points out. “Google’s concepts on this topic seem to flip that.”

Google’s previous replacement for third-party cookies, FLoC (or Federated Learning of Cohorts), is a form of interest-based tracking that identifies you based on your “cohort,” or a group of people that share similar interests.

Privacy critics, like the Electronic Frontier Foundation (EFF), argued the system poses additional privacy risks, such as making it easier for advertisers to identify you with browser fingerprinting, a tool used by sites to gain specific information about your device and browser, and may also expose information about your demographics, potentially resulting in discriminatory targeted ads. Due to these concerns, browsers like Brave, Vivaldi, Edge, and Mozilla have all refused to use it.

“It definitely improves on FLoC in some important ways,” Bennett Cyphers, a staff technologist at EFF told The Verge. “Being less scary than FLoC doesn’t mean it’s ‘good.’ It will tell third-party trackers about what kind of sites you browse, and it could help websites and advertisers ID you across devices.”

But Google’s idea of assigning topics to users isn’t exactly new. As EFF points out, Google’s Privacy Sandbox weighed the idea of PIGIN in 2019, otherwise known as “Private Interest Including Noise.” Like Topics, it would work by sharing a list of interests with advertisers, but as Cyphers of EFF explained at the time, it could still “provide trackers with a massive new stream of information they could use to build or augment their own user profiles.” A recent update says a newer version of that approach, under the name FLEDGE, is in early testing on Chrome and Chrome Canary. Google will share more details on that plan and “measurement technical proposals” later this week.