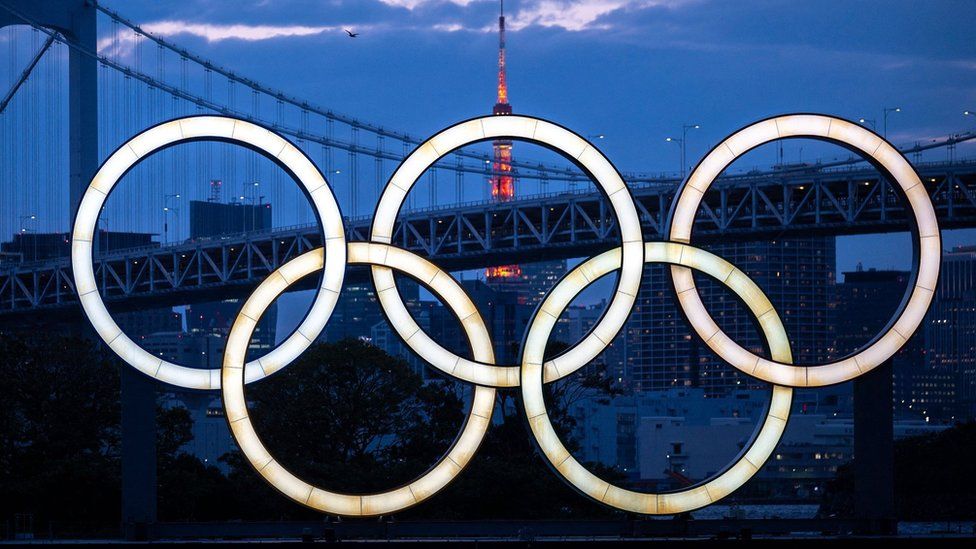 Next month's Winter Olympics is a huge marketing opportunity for sponsors - a showcase for brands.

However, Beijing 2022 is also causing a huge headache for the 13 official corporate partners of the Games.

Stuck in the middle of a diplomatic spat between the US and China - many are choosing to stay silent.

The US, UK, Australia and Canada are among the countries making a diplomatic boycott of the Games, although their athletes will still participate.

Those countries' governments have criticised China for alleged human rights violations against its minority Uyghur population, and its actions in Tibet and Hong Kong.

BBC analysis shows a dramatic reduction in tweets referring to the Games from the Olympics' global sponsors - as compared to last year's Summer Games in Tokyo.

The BBC also approached all 13 Olympic partners for comment on accusations of China human rights abuses. None responded directly to the allegations.

The former chief marketing officer for the US Olympic Committee at the Beijing 2008 Olympics, Rick Burton, told the BBC multinationals were "walking a tightrope".

"I don't think that any of them as global brands can afford, or are willing, to insult the Chinese government," he says.

The official worldwide partners of the Olympics are Airbnb, Alibaba, Allianz, Atos, Bridgestone, Coca-Cola, Intel, Omega, Panasonic, Procter Gamble, Samsung, Toyota, and Visa. Apart from Allianz, they were all global partners for Tokyo 2020.

In the build-up to the Olympics in Japan, many partners were pushing social media content - hyping up the Games.

For example, French tech firm Atos tweeted dozens of times in the lead-up - and would regularly post content marking the months, weeks and days until the Games began.

It also posted videos explaining how its tech was being used in the Olympics.

Some of the other major international partners tweeted regularly about sponsored athletes and Olympic-related innovations.

Yet those same accounts have barely mentioned Beijing 2022, which runs from 4 to 20 February.

The explanation, she says, is Washington's boycott.

The International Olympic Committee (IOC) told the BBC its worldwide partners are long-term and don't choose the location of the Games.

"The commercial partners are not involved in the selection of Olympic and Paralympic hosts," it said.

But the decision to give China the Games has left Olympic partners with a dilemma.

They are sponsors of the Olympics, rather than the location of the Games, something that watchmaker Omega wanted to make clear to the BBC.

"We firstly wish to highlight that Omega is not a sponsor of Beijing 2022," a spokesperson for the company said, adding it is the "official timekeeper and data handler of the Olympic Games".

Yet that has not stopped it from celebrating past Olympics on social media, far more so than in Beijing 2022. 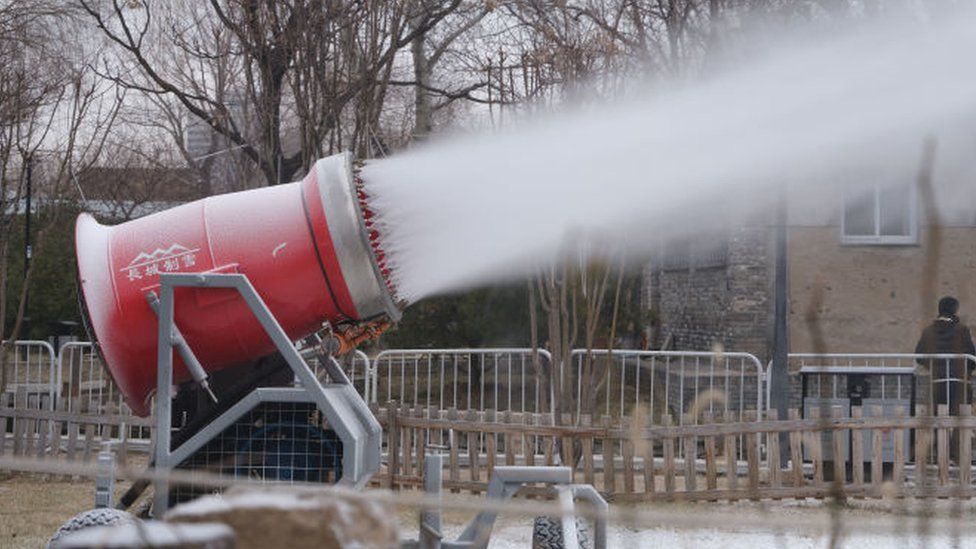 A snow machine at the Beijing Olympics

The problem is simple, and will have been played out in PR meetings in boardrooms of all of these companies.

Being overly supportive of the Games, without making reference to accusations of human rights abuses in China, will lead to criticism from the West.

Equally any statement that criticises the Chinese government may hurt prospects of doing business in the country.

Atos, for example, told the BBC: "We do not comment on issues outside of our role as worldwide IT partner of the Olympic and Paralympic Games."

Mr Burton believes that companies have kept quiet partly for political reasons, but there are also other factors at play.

"A lot of these sponsors spent a lot of money in Tokyo just a few months ago, so there's not only a bit of fatigue, but I think there are limitations on their budgets," he says.

"The Winter Games have just traditionally never been as big as the Summer Games."

But others believe Beijing 2022 presents global corporations with a problem that isn't going away.

"Multinationals will find it increasingly hard to remain neutral in the great power contest between China and the US," says Ms Choyleva.

Apple, the world's most valuable company, has long grappled with this problem. Its supply chain is heavily reliant on Chinese manufacturing - and the country is a huge market for the firm.

However its chief executive, Tim Cook, is regularly criticised for staying silent on the allegations against China. 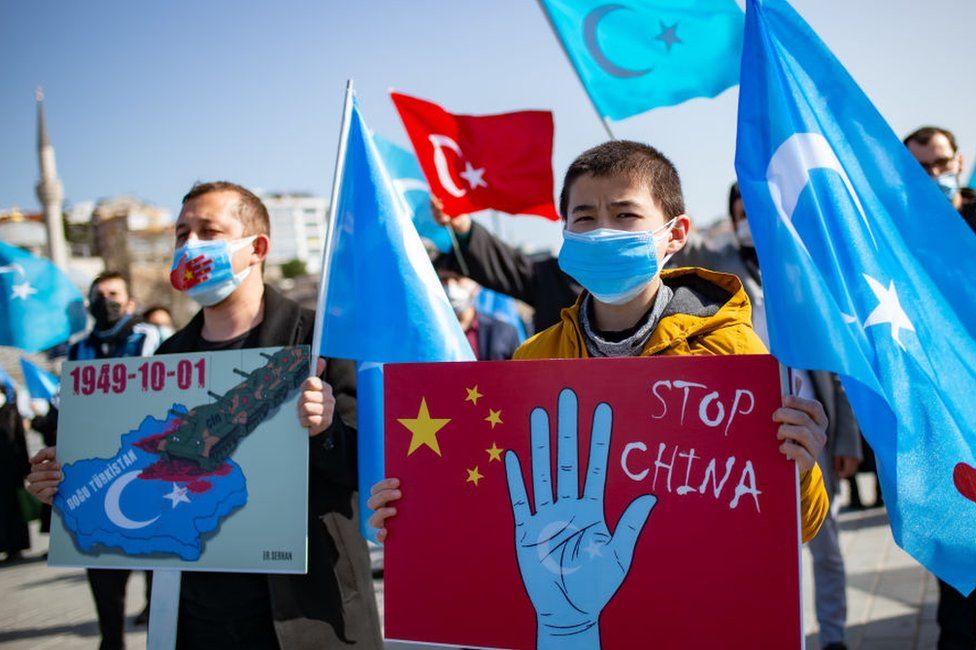 The Olympic partners all say they believe passionately in human rights. But Zumretay Arkin, from the World Uyghur Congress, got in touch with them last year asking to meet to talk about alleged human rights abuses, and says the response was silence.

"These companies always promote their values saying that they're aiming for inclusivity and human rights and all these beautiful values. But when it comes to China it's crazy how silent they become," she says.

Alibaba is the one Olympic partner that is Chinese, but it too is trapped in this diplomatic tug of war. It has also stayed fairly quiet on Western social media.

"Alibaba faces a variety of vulnerabilities." says Scott Kennedy, China expert at the Center for Strategic and International Studies.

"Not only are they listed on the New York Stock Exchange, they have significant business through their trade platform and e-commerce with the United States," he says.

If you watch TV in the US, for example, finding an advert that mentions Beijing 2022 is a rare thing, although there is some focus on individual US athletes.

"Even the interpretation of the results are going to be different. And companies that do business across that chasm are going to have to adapt for both," he says.

More on this story

Source: https://www.bbc.co.uk/news/business-60136347
We use cookies to ensure that we give you the best experience on our website. If you continue to use this site we will assume that you are happy with it. Ok